See the Quadraspire Factory and experience what the fuss is all about.

Excerpts from the Quadraspire Factory visit:

Life is what you make it, and Quadraspire's Eddie Spruit is living proof of this. Had he followed his planned career path, he would be in London now, dispensing law on behalf of corporate multinationals. A student of the School of Oriental and African Studies, young Edward’s major was in the economics of China and Japan. Then on graduating, he decided to do a conversion course to become a lawyer, and found himself working for Pfizer pharmaceuticals, as you do.

Quadraspire is passionate about the virtues of wood in all its myriad forms them, and is a recent convert to bamboo - a material Eddie and Alester think is excellent for audio applications. Eddie explains: "One of the companies we spray wood for, came along in 2010. It was an importer of bamboo sheets from China, and we decided to try some samples. We machines a Q4 Evo and compared the two blind. It was clearly better than the veneered MDF, which itself is a really good platform. It's a fantastic material and we have got a good response. Indeed, if I'd known about it twenty years ago, I wonder if I would have ever used veneers - probably just bamboo in three or four different finishes."

The aim with this was to come up with a design that was pleasing to the eye  in the home, but really competes on sonic terms with the really expensive designs.

The current Quadraspire range comprises of the Q4 Eva, SVT and X REF... The Q4 Evo delivered a good sound; the system sounded crisp and smooth with a pleasingly rhythmic nature... When an extra layer was added with the bronze spike upgrade, the sound changed to a surprising degree. It was as if a layer of noise had been stripped out, revealing more pronounced spaces between the notes. This gave a more dynamic sound, one that carried the rhythmic accents of the music more clearly. 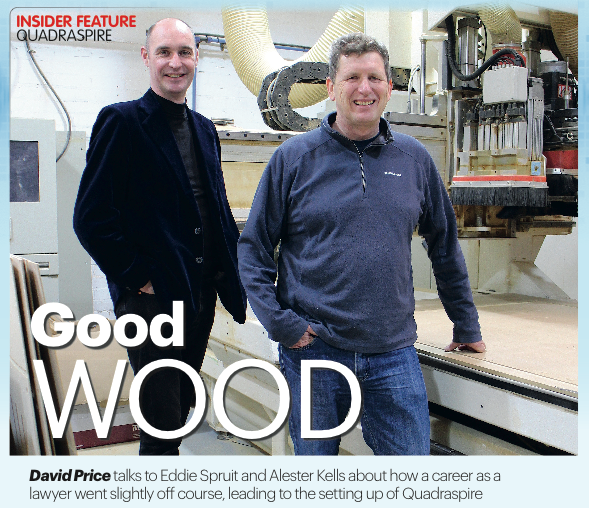