Carefully Reproduced From The Rega Book "A Vibration Measuring Machine" 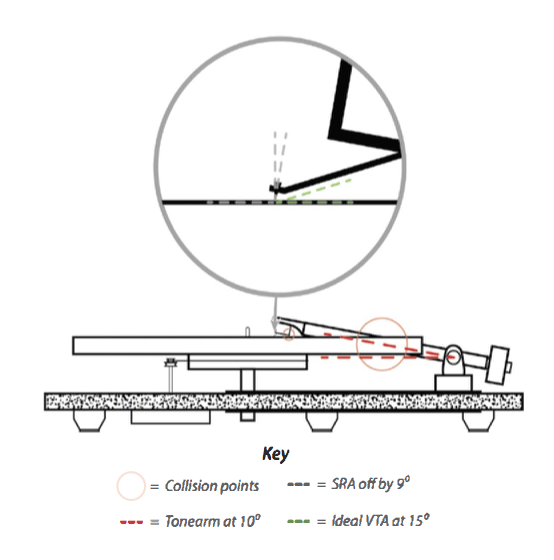 The world of turntable design is riddled with myths, all the more so since the turntable's vital role in system sound quality was established during the 1970s. Obsessive consumers often seem to suffer enormous (albeit quite unnecessary) angst over cartridge and stylus alignment, making minute adjustments to tonearms and cartridges in order to optimise the vertical tracking angle (VTA) and/ or stylus rake angle, azimuth, and overhang.

Rega has measured the vertical tracking angles of more than 100 different cartridge models, and has found that their actual VTAs vary between 20 and 36 degrees (with downforce), and most fell between 23 and 28 degrees. (Rega itself has opted for 27 degrees, without downforce, and 23 degrees at normal downforce.) The overall figures may therefore be up to 10 degrees greater than that required to meet the current (and nominal) 20 degree disc-cutting standard. (In practice, reducing the VTA of the cartridge cantilever to less than 23 degrees risks the rear of the cartridge fouling the disc surface.)

Furthermore, talk to the cutting engineers that are actually responsible for making the discs, and it's clear that they pay very little attention to so-called cutting 'standards' . One reason is simply because the VTA is defined by the mechanics of the cutter head, and is not normally changed by the cutting engineer. It may also vary by at least 7 degrees across a single disc, depending on frequency, cutting depth and lacquer springback. (Indeed, the standard itself was changed from 1958's 15 degrees to 20 degrees in 1975.)


Enthusiasts' favourite way of changing VTA 1s to adjust the height of the arm pillar, but a quick examination of the geometry involved clearly shows that a 0.5-inch variation in arm pillar height (probably the maximum possible in practice) will only change the VTA by 3 degrees (±1.5 degrees). Crucially, making the pillar adjustable in the first place is very undesirable from an overall rigidity perspective, since this joint is the turntable/arm's core reference point from which all system vibrations are measured.


Note that all formal disc-cutting parameters in practice fall below 18 degrees, whereas arm/ cartridge replay usually occurs above 24 degrees to avoid any risk of fouling the disc surface. That fact alone means that fiddling around with VTA adjustment is entirely futile. (In reality, the rear of the arm needs to be as close to the surface of the disc as possible. Any adjustment upward can only increase the unavoidable VTA inaccuracy.)

One method of measuring distortion due to VTA variation is to use a test record (in this case the CBS STR160 VTA test). A test tone of 400Hz is played and the second harmonic distortion is measured at 800Hz.

It can be seen that the graphs show no significant change to the second harmonic distortion even though the total effective change in the arm height is 9.5mm. Also note that the SRA is changing as well as the VTA.