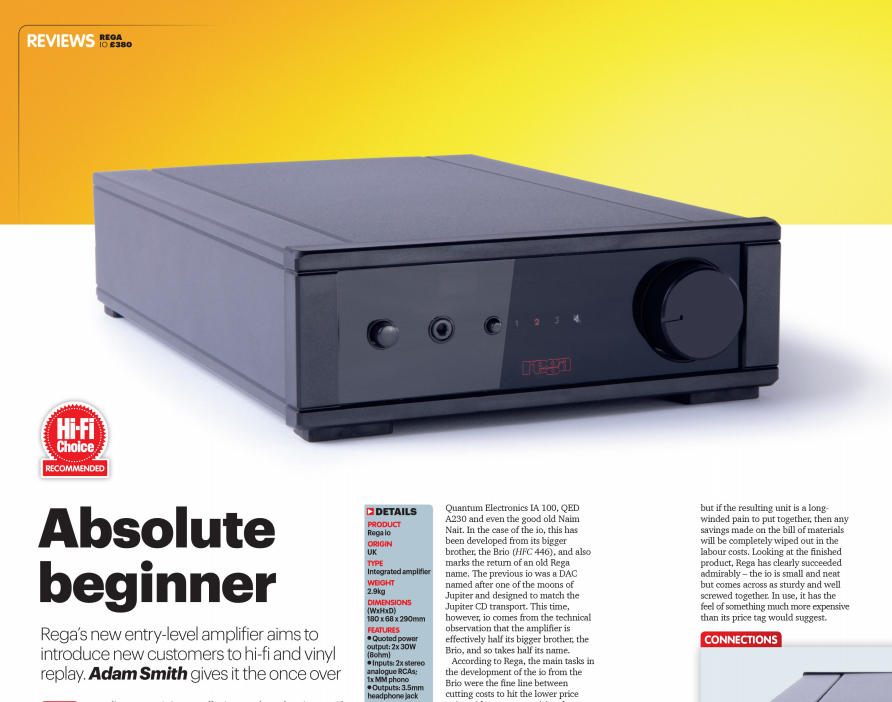 If you want to suck the air out of a room of audiophiles, mention "budget amplifiers". As the powerhouse of your system, the amplifier may be the one place you don't want to cut costs. Low priced amplifiers abound, but most offer bland performances and sub-par reproduction at best and at worst will introduce more noise and distortion into your system. But, what if there were an affordable integrated amplifier with great pedigree that offered smooth performance across the band, quality construction, and a class-leading phono ready to connect to your turntable of choice? Well then, you'd have the new Rega io.

Adam Smith of  Hi-Fi Choice recently got his hands and ears on a Rega io and set about putting it through its paces. Rega's new io (so named as it is "half" of the larger Brio in size, output, and price) was announced earlier in 2020 as part of Rega's new "System One". The io—and the System One—are aimed at the budget-mindful consumer who are starting their hi-fi journey or aren't ready to spend thousands on each component. That being said, the io is hardly an "entry level" performer; rather, it gives your the type of power, character, and reproduction that you'd expect at a much higher price point.

Adam Smith hooked the io into his system devoted to budget equipment, fitting it with components that it could very well meet out "in the wild", such as an NAD C 558 turntable and Usher S-520 speakers. From the get-go, Smith knew he wasn't dealing with your typical budget amp; the io was a beast of a whole different manner.

From the first bars of music it is clear that the io is something rather special at its price point. With any budget amplifier there is always a sense of trepidation when waiting to see what the first notes will bring. While many are fun to listen to, they can be a little over exuberant at times. This never falls into this trap and, as a result, has the character of something you would expect to be rather more expensive...The Rega's sophisticated nature means forming a well-balanced system with budget sources and speakers is much easier, and is a definite strength.

But the io performs well across the board, not just in terms of its price point. Smith notes that the top end of the frequency spectrum is really where the io shines, offering tons of detail with a lack of sibilance. But the io is no stranger to the low end, either. It produces lots of rumble and depth when needed, while retaining clarity and punch for basslines and runs.

In the end, Adam Smith was impressed by  Rega's io, giving it near perfect marks and awarding it Hi-Fi Choice's "Recommended" badge.